Ceremonial Cacao: A Conversation About It’s Use and Effects 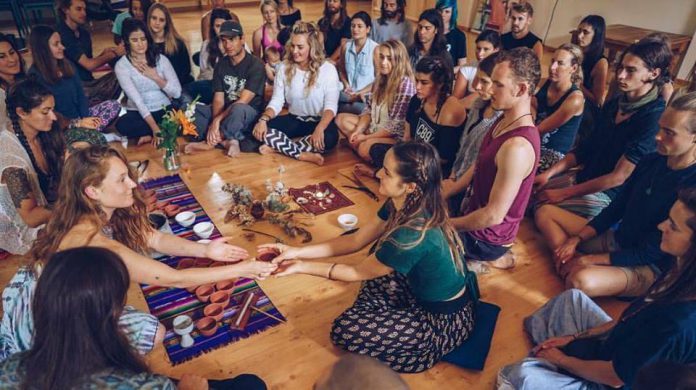 Cacao is a plant of deep ceremonial importance to the native peoples of Central and South America. It’s stewed in spiritual, cultural and ritual significance, and the ceremonial use of Cacao has grown in awareness and popularity in the United States along with other shamanic practices of these regions, such as Ayahuasca.

As we Americans expand our awareness, we’re beginning to understand how wellness extends beyond the physical body. Emotional and spiritual health are just as important, and more people are searching for spiritual, energetic and social connection. We are beginning to explore and adopt the wisdom of Mesoamerican cultures in our own personal wellness journeys — including the ceremonial use of cacao.

For this article, I spoke with my friend Nav Sunder, a Kundalini yogi who has participated in multiple cacao ceremonies and partakes of cacao almost every day as part of his daily routine.  I sought to understand the importance of cacao and its ceremonies in improving wellness and happiness.

Read more: All About Ayahuasca: Retreats, Trips & The Truth

How did you first hear about cacao and what got you interested in it?

I was into other types of ceremonies at the time. When I heard about it being a ceremony and not psychedelic, I was like “Sure! I’ll try that!” Hearing about how it was a heart medicine was why I got interested in it.

What’s the difference between “ceremonial cacao” and just… drinking cacao?

Ceremonial cacao comes in blocks that you shave off and put in water, so it’s only the cacao. The shaman that prepares it also does blessings on it.

When it comes to drinking ceremonial cacao, there’s no sugar added. There’s no dairy added. You want to get the directness of the cacao and those additions can inhibit the effects. Sometimes, the person preparing will add cayenne or cinnamon or vanilla. Usually, if you’re just drinking cacao as food, it has sugar added and it’s for pleasure. Ceremonial cacao has a higher grade, and the difference, too, is the intention behind it.

What does a cacao ceremony look like?  What’s the process?

I’ve done it with different people, and they all do it a little differently.  It usually starts with a recognition of the cacao: smelling it, honoring it, taking a few sips, letting it sit on your palate, tasting all of it, and then slowly drinking it, sitting with it, not rushing into something else and appreciating what it has to offer. There might be a short meditation, dancing or a connection with someone else. Breathwork, too. Cacao, to me, is a tool to help when you do other spiritual work. It helps when you want to have an open-hearted experience.

What would you say are the physical, emotional and spiritual effects of cacao?

It brings some joy in — for me at least.  Like I said, it’s definitely a heart medicine, so you’re able to connect with your heart and find the joy.  The heart is very important within the system, because when the heart is open you heal the rest.

Cacao is very warm, and some people mix it with cayenne so it brings up even more heat to flow through your body. It has antioxidants and some minerals, so you get this feeling of being physically supported. It can catalyze being connected with other people, and connected with yourself.

So heart opening, connective and releasing blockages to that connection?

Have you come out of a ceremony with a major shift?

Oh definitely! One of the biggest ones, I was eye gazing with someone. Eye gazing is a practice to open connection and trust with others by holding their gaze for extended periods of time. Near the end of it, with my heart open and doing the eye gazing, the cacao helped me get into a full alignment with that connection.  It helped bring me back to Source.

Cacao is like a catalyst.  It helps you open the door into spiritual space.

I’m curious about your daily cacao practice. What does that look like?

Recently, it’s been my morning brew. I have a block of ceremonial cacao, and I shave off some and cook it. I like to sit with the sun as it’s just rising, and to start the day off with that space of peacefulness, and a boost, because cacao is also energizing. I sit in gratitude with it. I drink it and sit in gratitude for the day.

What would you say is the importance of community and ceremony with the cacao?

It’s the support of the presence of other people who also are wanting to go on that journey.  Also, since someone leads the ceremony, you don’t have to question what’s next and can just sit in the flow of things; when someone knows how to lead a ceremony very well, it also really heightens the experience. It’s fun to have cacao with other people because it’s supportive and joyful to open hearts together and be in that space together.

I’ve heard about there being a “spirit” of the plant. Could you explain what that means?

They say that everything has a spirit, so when you ingest something, you’re ingesting that spirit and communing with that. When you talk about “spirit,” it has a direct correlation to the physiological effects on the body and the effects you see in science. So, the spirit to me is a joyful one.

If you compare it to other things that people do ceremonies with, those are usually psychedelics, but cacao is one that is not as hard on the psyche. It’s an open, playful energy, like “I love everybody! Now things are being released!”

If you pay attention to astrology in the slightest—or, well, use any social media platforms—you’ve probably heard people talk about the moon’s...
Read more
Health & Wellness

5 Yoga Poses That Will Help You Beat Holiday Stress

The holiday season is full of cheer, joy, togetherness, delicious meals and traditions. Still, it’s quite easy to get caught up in...
Read more

If you pay attention to astrology in the slightest—or, well, use any social media platforms—you’ve probably heard people talk about the moon’s...
Read more